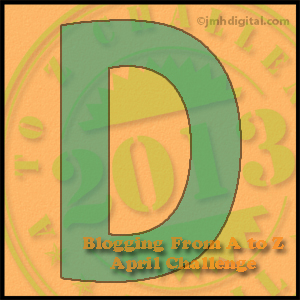 D is for Dyslexia


A few months ago, I thought dyslexia was a rare disorder where you read words backwards. A few weeks ago I found out that dyslexia is quite common, involves a whole lot more than reading things backwards and that my fourteen year old honor student has the disorder. I’m still reeling.


How could I, a writer and a book addict, miss something so huge?


To be fair, I always knew there was something special about my son. I knew his mind worked in a completely different way from my own. I knew he was brilliant, creative and liked to do things his own way. When he was in first grade, I scheduled a meeting with the teacher about his handwriting. He writes from the bottom up. Not some letters…all of them. It’s the strangest thing to watch. The teacher didn’t seem concerned. She said it was legible and his grades were good.

In second grade I asked if he needed speech therapy. He couldn’t, and still can’t, say the word ‘theatre’. He ran words together, especially when he got excited. Again, the teacher didn’t see any reason to test him. He’d had a soft palate injury when he was a toddler and I decided he must have developed a small speech issue that wasn’t cause for concern.


As he moved into higher grades and finally to middle school, I bought my son books on stress management. He seemed especially hard on himself where school was concerned. Granted, I have high expectations for my kids. They’re both bright and I’ve always told them to do their best. My son often asked me to ‘go over’ things with him. We studied together. He always asked me to quiz him before a test and he always asked me to check his work


It wasn’t until this year that I really started to notice my son might have a problem with reading. He stopped reading for pleasure. He said he was too tired, it was too much after working so hard in school. He’s in all pre-AP classes, so I thought he had a point and let it go. In his social studies class, all tests are essay tests. Suddenly his grades dropped. He started preparing for the test a week before, writing out the entire essay and then memorizing it. His grades went back up.

When I first spoke to his English teacher, she dismissed the idea of a reading disorder. She said she didn’t see any sign of that in the classroom and that she thought he had ADD?!  I started researching reading disorders and with a dawning horror realized that my son displayed definite signs of dyslexia. I went over the English teacher’s head and contacted the school counselor. That was last November.


I don’t blame the teachers or the school for missing my son’s dyslexia. I don’t blame myself – well, I try not to blame myself too much. I wish I’d discovered it sooner, but I’m grateful we caught it before high school and that we have such wonderful accommodations available at our school.


I am in awe of my son. He’s done so well in school by sheer determination. He’s getting accommodations now and when they signed him up for audio books, you should have seen his excitement. He craves knowledge and has been starving for it! He’s downloaded books on computer programming, history, and science. He’s experiencing excitement and a flooding sense of relief. He’s not ashamed or embarrassed. When he first started getting tested, his friends couldn’t believe it. He’s known as the smart kid and I guess there is still a stigma that dyslexics don’t do well in school. But he’s finding out there are a lot of closet dyslexics. I asked him if I could use ‘D’ to write about his dyslexia. “Sure,” he said, “that’d be cool.” I asked him if he was sure and he said, “Yeah, why not?”
Exactly.
Posted by Kristi Jones at 7:32 AM