I is for I loved The Last Policeman by Ben H. Winters 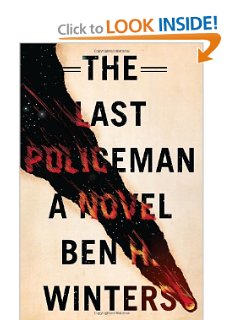 I read this book in less than twenty-four hours. Hank Palace is a newly made detective on his first case. Unfortunately, the world is about to end and nobody else cares about solving crime. His victim is a ‘hanger’, assumed to be just another suicide that couldn’t face the upcoming extinction event. But something about the crime scene doesn’t sit right with Detective Palace and while the world hurls toward destruction, he does everything he can to solve the mystery of this apparent suicide.


I’m thrilled that The Last Policeman is just the first installment of what will be a trilogy. I literally could not put this book down. The main character is fascinating. He’s a good man with ideals that have gone out of fashion all too quickly. He is confused and a little lost, but refuses to give in to despair. I can’t wait to see what happens next. The novel is a complete read. The author doesn’t leave the reader hanging over the edge of a cliff, however, there is also so much more to know.
This isn’t like any other apocalyptic story I’ve read. It’s not a horror fest. The Last Policeman takes a thoughtful look at our mortality, both as individuals and as a species.  And yet, I did not trudge through this book. It was just tons of fun to read. I will read anything Ben H. Winters writes. (Except perhaps Sense and Sensibility and Sea Monsters)
Posted by Kristi Jones at 7:10 AM