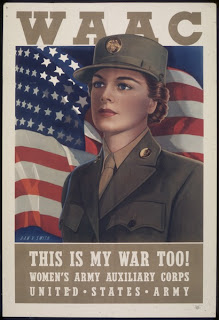 This morning I woke up two hours before my alarm was set to go off. I've been playing around with a new writing project that combines two of my favorite things - history and murder! Initially I was a little anxious to delve too deeply into this new novel idea because I've never tried to write a murder mystery before, but it's so much fun I just can't stop!

My main character, Dottie Lincoln, is a WAAC. What's a WAAC? She's a member of the Women's Auxiliary Army Corps.

The bill to create an American women's army was presented to Congress by Congresswoman Edith Nourse Rogers of Massachusetts in May 1941, but it wasn't until after the attack on Pearl Harbor that the bill garnered support. With some help from First Lady Eleanor Roosevelt, the bill passed on May 14, 1942. The idea was for women  to fill non-combat positions, thus releasing men to the fighting front.  But these pioneering women were much more than 'glorified secretaries'. They bravely paved the way for a new kind of women's liberation.

My book is not a treatise on women in the American military, but I can't help sharing some of the fascinating facts I'm discovering about these first female American soldiers. I'll also be posting some cool information about Texas POW camps during World War II while I create my own fictional camp for my new novel!
Posted by Kristi Jones at 7:59 AM